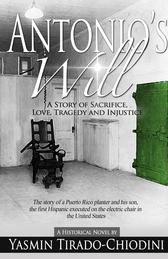 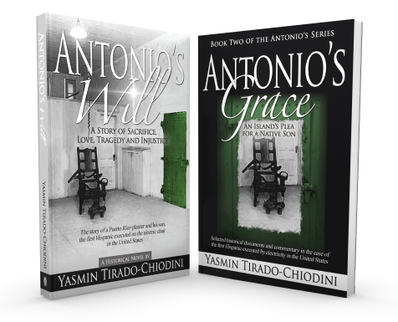 Available on E-book and Paperback on Amazon 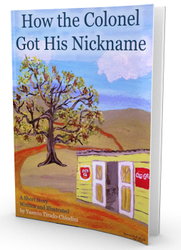 Click Here to Get the FREE Kindle Reading App

"How the Colonel Got His Nickname," A Short Story based on Antonio's Will featuring one of the Pontón family living descendants and illustrated by the author is available for FREE to ARG subscribers!

Join the author's Advanced Reader Group and be the first to learn about promotions, book developments, receive free writing pieces, and participate in giveaways!

A Story of Sacrifice, Love, Tragedy, and Injustice

Book 1 of The Antonio's Series

A Historical Novel Based on a True Story

​A child emigrates from Spain to Puerto Rico in 1870, adapts to a new culture, and strives through hurricanes, disease and war to become a prominent tobacco planter. With high hopes, he sends his son Antonio to Albany Law School in New York, but the young man loses his will, commits an atrocious crime, and is executed on the electric chair at the Sing Sing penitentiary. Antonio's spirit returns one hundred years later to persuade a family member, who is also a lawyer and amateur genealogist, to uncover his wrongful execution. Amid a historical, cultural and legal backdrop spanning three countries and over a century, ANTONIO'S WILL exposes the tragic events: the murder, the trial errors, the desolation at the Sing Sing Prison, the pleas of an entire island to save him, and his unjust execution. This is Antonio’s story, but it is also a call for equal justice for all people.  ​

Available on E-book and Paperback on Amazon

and Paperback (Scroll down). ​

The Spanish version is now available on

Excerpts of Amazon Reviews of Antonio's Will

“It felt like a Gabriel Garcia Marquez book at times, full of rich detail and fascinating individuals... The author's mind is formidable... A powerful and emotionally charged book - impressive.”

“[The author] opens her book with historical accuracy that reads like the finest historical fiction - only this story is directed toward revealing truths. ... This is a powerful, compelling historical novel that is deserving of a wide readership. Highly recommended.”

“I couldn’t put it down. Read it in 2 days and I was transported to the era, scenes, smells, fears and feelings. The writing style is clear and enchanting. I love the history lesson in a well-written story that captivates from beginning to end. It should become a required book for High School reading.”

"One of the best historical novels I have ever read in my life. ! And I do read a lot! ... I deeply recommend it!"

“I'd recommend it to anyone who likes to reflect on life, learn and think about universal values.”

“She meticulously builds her case … each tidbit becomes a part of the story that enriches, rather than encumbers it … and by the end of the book, you realize that you should have expected no less. I really enjoyed this book.”

"As a retired judge and attorney, I was particularly impressed with her legal research and analysis and I congratulate Ms. Yasmin Tirado on her meticulous and richly detailed explanation of the criminal trial of Antonio Ponton."

“Excellent merge of the world of genealogy, law, forensic psychiatry and personal history. … [The author] create[s] a book that is not only accurate on its descriptions, but in my case, as a psychiatrist with many years of expertise in the field of Forensics, very realistic.”

“A must for history buffs, but it’s also an important book for everyone to read. Pointing out injustice and learning from it helps prevent it from happening again. The more people who see its hand at play the better the world will be.”

“I couldn’t get enough of it. It was informative and beautifully written.”

“I enjoyed reading this book. I like reading legal stories and I learned a lot about of Puerto Rico in the process. The author did an incredible amount of research for this book and it shows in the detail of the story.”

An Island's Plea for a Native Son

​Book 2 of The Antonio's Series

On January 7, 1916, Antonio Pontón, a Puerto Rican student at Albany Law School who suffered from mental illness, became the first Hispanic executed in the electric chair at the Sing Sing Prison in New York. Author Yasmin Tirado-Chiodini tells a fictionalized account of Pontón’s story in her historical novel ANTONIO'S WILL, the first book in The Antonio’s Series. This second book, ANTONIO'S GRACE, is a work of non-fiction in which the author takes a closer look at the trial and clemency process in the Pontón case. In it, she shares photographs and a selection of the thousands of documents she found, containing clemency writings endorsed by over 21,000 people who prayed in vain for grace for Pontón. Tirado-Chiodini’s research and analysis of the case one hundred years later uncover the injustices surrounding Pontón’s murder trial and examine the viability of the death penalty as a just measure. The names and voices of clemency have returned after a century to plead once again for an island’s native son. Will you listen?

Bonus: This book contains an Appendix with over 21,000 names of people and organizations that petitioned for clemency for Antonio Pontón. This is a valuable research resource for historians, anthropologists, and genealogists.