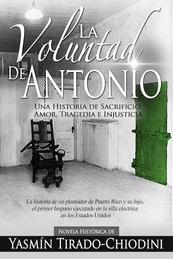 Scroll down for Presentations, News, and Blog Articles.

Attention Book Clubs! The author is available for online conversations via Skype!

Yasmin Tirado-Chiodini and her books Antonio's Will and Antonio's Grace featured in Latina Style Magazine. (12/2015)

The book launch of "Antonio's Grace: An Island's Plea for a Native Son," featured by the World Coalition Against the Death Penalty as a 13th World Day event. (10/8/2015)

Yasmin Tirado-Chiodini is now featured in The Latino Author, "a platform for Latino writers, Latino authors, and all readers to come together around the world."

Read "Adiós," a chapter of "Antonio's Will," featured in "Centro Voices" the e-magazine of the Center for Puerto Rican Studies, Hunter College, New York